It’s time for another recipe. One that i only lately started perfecting and refine with various ingredients. These pancakes have become a substantial part of our homely sunday breakfasts. I used to make them exclusively for my wife when i was eating LCHF very strictly – but since these pancakes are so terribly delicious, i treated myself every once in a while – well, now it’s more like every weekend but it’s totally worth it.

On a side note, this is also the dish i cooked my wife the morning after she went into labour. I don’t think the pancakes made that much of a difference, but three hours later, our lovely baby son was born healthy and without complications.

Less talk, more rock though, here’s how it’s done, here’s what’s needed (serves 2-3 hungry mouths as a full blown breakfast and probably a lot more people as a side if you’re having brunch):

The most exciting thing about these pancakes, you can really bring in some variation by switching some of the ingredients. Don’t like bananas? Screw them. Prefer Strawberries? Put them instead. Love a hum of coffee? Put coffee yoghurt instead? Go crazy experimenting with “secret ingredients”..

Also, the recipe “scales” well – the ingredients are easily divided by three, so if you’re less hungry, or only cooking for one, just put 1 egg instead of three, 50g of flour instead 150 and so on.

Put a big pan on a low heat and melt some butter, just enough to grease the whole pa surface a bit, so nothing sticks or burns.

Meanwhile, we prepare the dough.

Put the fruit into a bowl – if you have berries, squish some of them and leave some intact for variety. Some of them get squished in the mixing process anyway so it doesn’t matter too much. 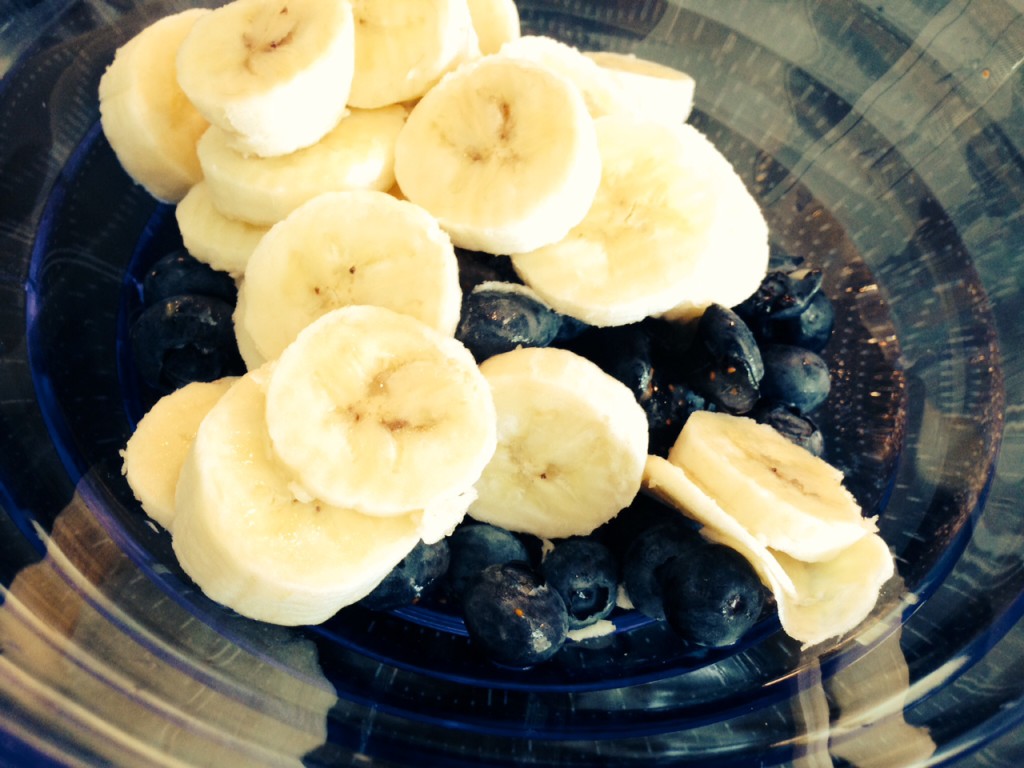 Put the flour, icing sugar and baking soda into the bowl with the fruit. Add a pinch of salt.

Put the yoghurt in another bowl, fill up with milk until you have 300ml or whatever you calculated while scaling the recipe up or down to your needs. Add the eggs and whisk everything up a bit until you get a nice creamy yellow liquid. Slowly pour this mixture over the rest of the ingredient and keep whisking slowly and carefully. 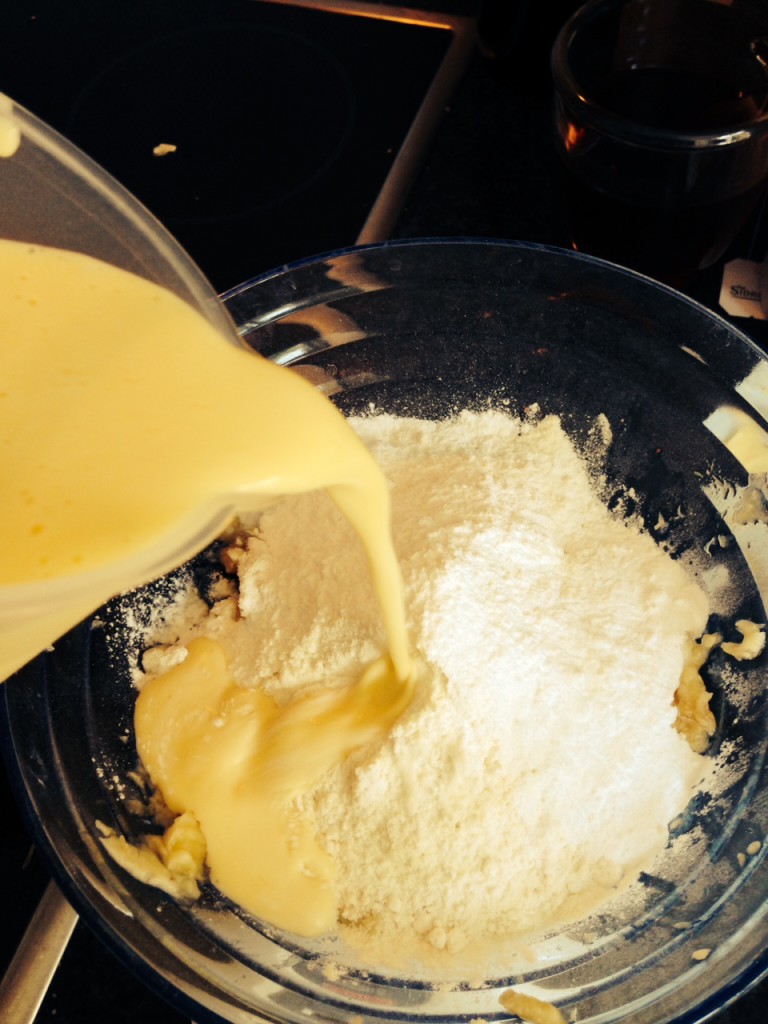 Whisk until everything has blended together nicely. Make sure that the flour has completely been bound and the fruit is more or less homogenous with the dough. It should not be too thin and not too thick – still liquid but not too pasty. You should be able to make nice thick pancakes out of it – obviously. The look & feel of the dough should be close to vanilla pudding.

The tricky part in making the perfect definitive most awesomely delicious American Pancakes lies in frying them. Everyone can mix together some dough but timing is key when it comes to frying them.

Since you can only fry them one by one or maybe three by three depending on the size of your frying pan – now’s the time to put a dish into your oven which should be heated to the lowest heat possible, like 50° or 60° C just to keep the finished cakes warm while you fry the next batch.

Use a soup ladle to deliver small lugs of dough into the frying pan where the butter should be melted by now. Pour nicely formed cakes that are about 10-15cm in diameter. 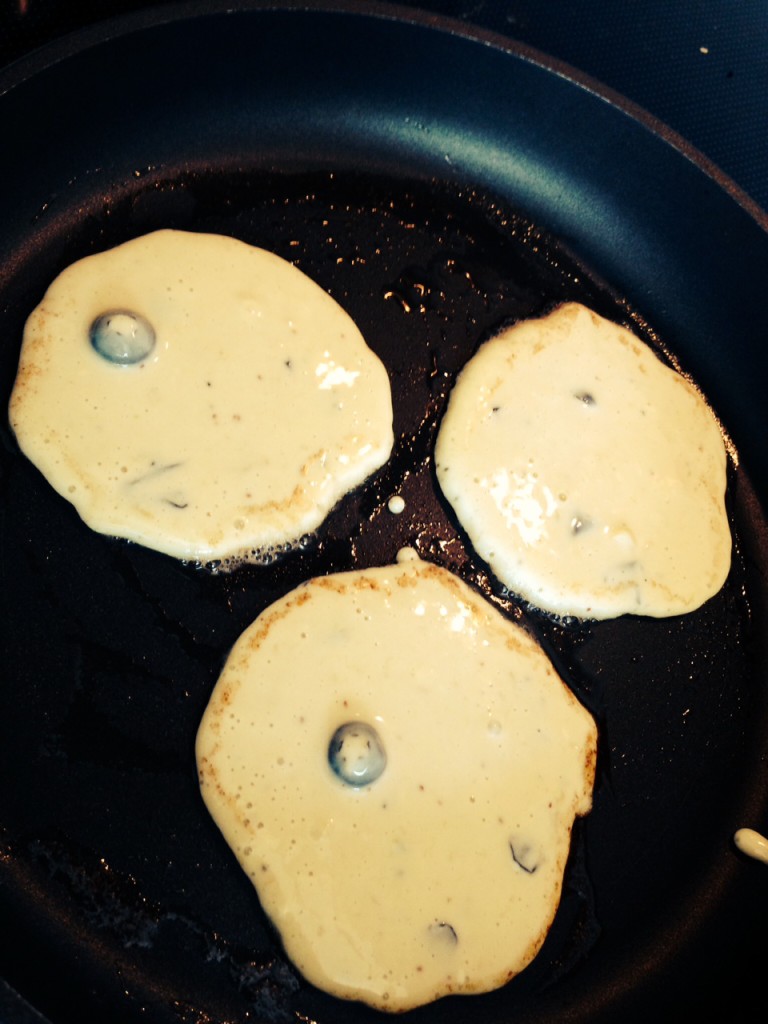 Let those fry for about 1-2 minutes. Depending on how low the “low heat” setting actually is on your stove, they should take about that long until small bubbles start to form on the pancake surface, just like in the image below.

It’s exactly those bubbles that tell you when it’s time to flip them over.

You really want the frying to take it’s time. If the heat’s too high, they tend to burn up on one side, which is less than desirable. If that happend too quickly, just lower the heat. This is supposed to be “slow food” gourmet stuff right there.

Take a thin spatula and try to lift them up and flip them over. The spatula should easily go under the cakes which should be firm on the bottom by now. 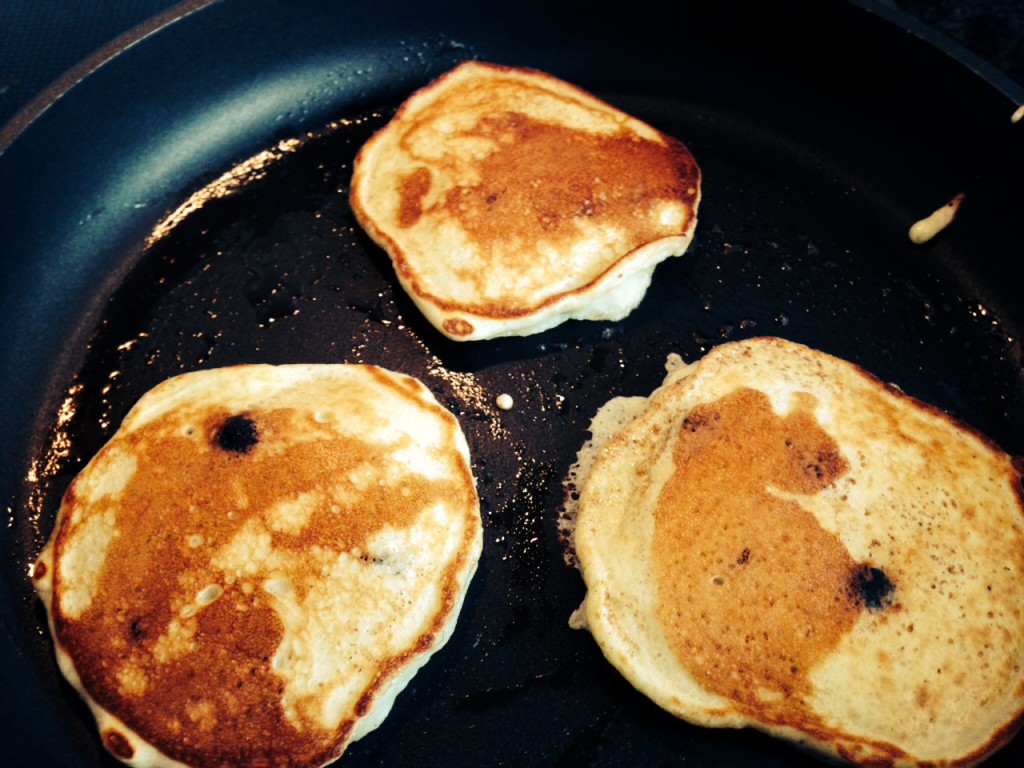 That’s it – if they look like this, you’ve done it about right. Leave them in the pan for about another minute (they take less time than on the first side), then scoop them up and drop them on the preheated plate sitting in the oven.

Put a little more butter into the now empty frying pan and repeat the process until all the dough is used up. This will eventually leave you with a plate full of tasty goodness – feel free to stack them like a tower or a big heap like this. 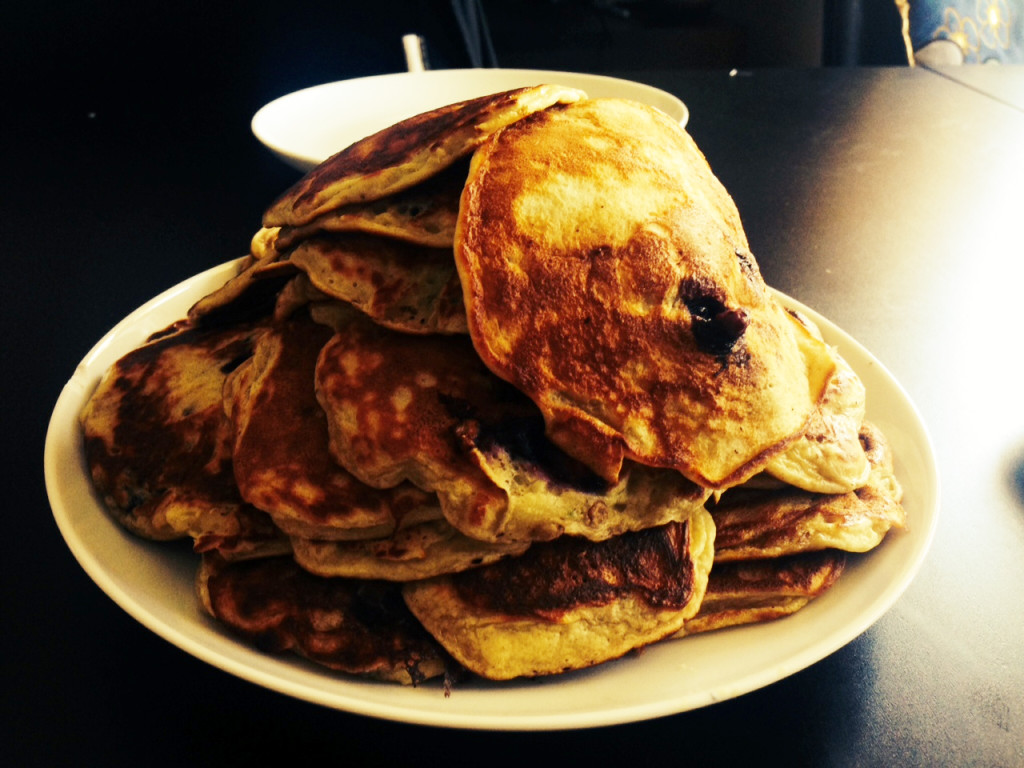 On top of Mt. Pancake

Feel free to dress them as you like! I prefer smearing nutella all over them, which makes for an extremely awesome combination in case you put bananas in there before. My wife prefers the classic: Maple Syrup. Basically there’s no restrictions – honey, sweetened condensed milk, marmalade, marshmallow fluff, anything goes at this point.